Edward Whymper, engraver and mountaineer. With little or no climbing experience made the first British ascent of the Pelvoux in 1861. During the next four years his seven attempts on the Matterhorn were unsuccessful and so, from the Italian side, he crossed to Zermatt joining forces with the young Lord Francis Douglas and his guide old Peter Taugwalder. Whymper’s favourite guide, Michel Croz, was there having been engaged by the Revd. Charles Hudson and 19 year old Douglas Hadow who also had their eyes set on the Matterhorn. Whilst Whymper, himself only 24 years old, considered the party too big, eight including Tugwalder’s two sons taken as porters, by desire of their father, it succeeded in reaching the summit after camping high up overnight. Croz and young Peter Taugwalder had gone on to see what lay above - We could have gone to the summit and returned to-day easily. If they had then the tragedy which followed would not have occurred?

Descent of the Matterhorn

The substance of Chapter XXII appeared in a letter to The Times, August 8, 1865

I do not forget the somewhat spasmodic efforts in Alpine painting which have been made in late years by one or two of our landscape-painters. But so far as I know, despite one or two fairly successful beginnings, none of them have persevered in the endeavour to represent mountains. Of all men, Mr. Edward Whymper has effected most in this field. His wood engravings show how much may be done even on a very small scale and without colour. A volume of portraits of the great peaks by his hand

In his diary for  1858 an eighteen old Whymper wrote

April 11. Sunday. The Rev. M. Davies, the secretary of the (Religious) Tract Society, preached both times. We had him home for dinner , and although I have the strongest hatred and disgust of the Tract Society’s way of doing business, yet Mr Davies left a very favourable impression on my mind’.

June 4. ‘In (the) evening I visited for the first time Mr Albert Smith’s entertainment of Mont Blanc, etc., which closes this season finally’.

May 20. ‘Finished up sketches. I have been fortunate enough to please my father with my sketches, and to-day Mr J. Gilbert looked at some of them and praised them, though I think it is doubtful if he is sincere in what he says’.

(Josiah Gilbert - The Dolomite Mountains 1864 in which the  engravings on wood are by Mr. E. Whymper)

The first edition of Swiss Pictures Drawn with Pen and Pencil was published in 1866 and remained in print until 1891.

Samuel Manning (1822-1881), Baptist Minister of Sheppard's Barton, Somerset from 1846-61 became editor of the 'Baptist Magazine’ and also general book editor of the Religious Tract Society. Samuel G. Green was the editor of the final edition in 1891.

Jill (Bill) Neate wrote 'A popular pastime is the compiling of lists of the 'The 100 best . . .' kind. The highest book on her pedestal and I agree with her, was Whymper's 'Scrambles'.

'Scrambles Amongst the Alps' published by John Murray in 1871.

In 1860 Edward Whymper, a 20 year old artist and already a skilled engraver, about to undertake a long continental tour, was requested by

peaks, including Mont Pelvoux which a group of English mountaineers (including William Mathews and Prof. T.G., Bonney et al.)  attempted.

This party had been unsuccessful, but Whymper, together with, 'a right good fellow' Jean Reynaud, and his friend MacDonald, ascended to the highest point of the mountain in August the following year. All will know what followed this introduction to alpine mountaineering.

Apart from Whymper's able pen for descriptive writing, his pencil for the full page illustrations really make this book an extremely desirable one - especially the first edition of which there were printed only 1245 copies and which sold out in weeks. He took particular care, over a period of six years, to ensure that the engravings were of the finest quality. He praises Mr. James Mahoney, an Irish artist, and Mr. Cyrus Johnston who draw the illustrations on wood. 'Most of the subjects required very fine and finished engraving'.

The paper manufacturer Messrs. Dickinson assured Whymper that the paper used in the book, for the leaves, was the finest they had ever produced. Further carefully made paper was produced for the plates, slightly glossy on the front, in order to print the sharpest of impressions, but matt on the verso. Close examination of the plates in the first edition show that there is no wear to the wood engraving when compared with subsequent editions up to the 'Fifth Thousand'. A second edition, possibly a further 5000 copies, was published in Autumn of the same year, and maintained the high standard throughout.

All in all, with a particularly attractive green cloth binding, with bevelled edges and handsome gilt decorated spine, it is a weighty book beautifully presented. 'Mr. Clark's printing will speak for itself'.

There was also a little known 'authors edition' of just 20 copies, individually presented to his friends, carefully put together by Whymper who meticulously hand picked the page leaves and plates. One such copy he gave to William Longman, the London publisher who had, unintentionally started Whymper on his mountaineering career.

Whymper continued to seek perfection in the production of his book. After a hugely successful reprint, in condensed form, 'The Ascent of the Matterhorn' in 1880 he worked towards a further improvement until in 1893 a fourth 'de-luxe' edition was published with extra illustrations and 36 more pages. Bound by the fine bookbinder firm of Zaehnsdorf, in cream coloured buckram cloth with leather title spine label and decorated with gilt snowflakes, it is now considered rare.

The top edge of the pages were gilded with gold leaf whilst the fore and bottom edges remained uncut. Originally this edition, with a dust wrapper, was housed in a made to measure slip case which is now often

missing.. 'The few remaining copies can (could) only be obtained from the Author'.

Whymper stayed at his father's home in Haslemere whilst he wrote 'Scrambles' and the Rev. Sanders Etheridge was Rector of St. Bartholomews Church, Haslemere was their vicar.

This 'Authors Edition' of the definitive 4th. de-luxe is previously unknown, but I am now able to confirm it's existence as I have, in my own collection, another copy which was given to the artist E.T. Compton

by the author. Both have an almost identical fine binding with matching endpapers.

A fifth edition in published 1900 was the last Whymper's lifetime, then a 'pocket' edition appeared before John Murray was perhaps being reminded of the potential of such a classic and published the sixth edition in 1936. Remarkably, apart from a few years, it has remained in print until this day.

Had there been a mountaineering book award to be won in those days then surely this classic by Edward Whymper would have received it. Perhaps he deserves a posthumus Boardman Tasker?

I should add that if I were to be stranded on a desert island there could be only one choice of the book that would be taken with me!

The 150th anniversary of the First Ascent of the Matterhorn by Edward Whymper will be celebrated in Zermatt and in Cervinia next year. For copies of books by Whymper and Tyndall click the button or email astill.tony at gmail.com 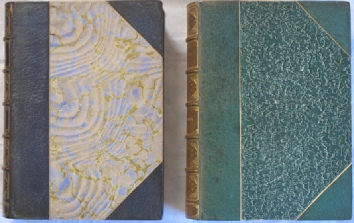 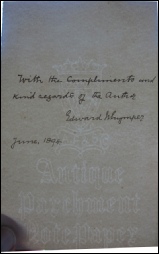 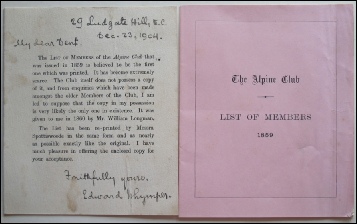