Daily Express ALL THIS AND EVEREST TOO Briton First On Roof Of The World. Hillary, aged 34, does it.  1953 2nd. June  pp8.  illus. complete issue of this original newspaper signed by Ed Hillary, George Band, George Lowe, Charles Wylie, Michael Ward, Mike Westmacott and by Jan Morris The TIMES Special Correspondent.

AUTOGRAPH SIGNATURE on card 6.5 x 10 cms.  1953  an interesting early signature obtained at a reception given by the Overseas League in Singapore, September 1953. Then sent to E.J. Enstice Esq., Redruth, Cornwall via Air Mail in envelope with 6 Singapore stamps inc. the 10 cents Coronation stamp.

Photograph signed by Ed Hillary who stands next to Tenzing on their return from the ascent of Everest. a copyright photo print 20 x 25 cms.

Tensing Norgay, E.P. Hillary, John Hunt. SUITE OF signed PHOTOGRAPHS. a very rare trio of original signed portrait photographs       c. 13 x 8 cms. Tenzing signature unusually in capitals, early signature of E.P. Hillary and John Hunt in ink c1965? Tenzing stands at the Planters Club on the same spot as he did in 1935 when Shipton selected him to join the Reconnaissance expedition.

Tenzing A Tenzing signature. A special piece of Everest memorabilia.  with a Postcard of Tenzing signing autographs in the street in Grindelwald, Switzerland. The view shows the female admirer for whom he is signing and her treasured original TENZING signature of 22nd. July 1953 is in a hand written envelope. The postcard is also signed by Ed Hillary across the image of Tenzing and by Charles Wylie, Michael Ward, Mike Westmacott, George Lowe, George Band and Alf Gregory on the verso.

Tenzing Norgay and Hillary A signed First Day of Issue Cover commemorating the 25th Anniversary of the First Ascent of Mount Everest. signed by Tenzing and Hillary, bearing 2 commemorative postage stamps issued by the Kingdom of Nepal, postmarked at Namche Bazar with cancellation 29.5.1978. 1978 with the specially stamped Mount Everest medallion, showing Hillary and Tenzing on the summit, in the centre of the envelope. Complete in original presentation wallet and with the original letter to the collector.

Tenzing Tenzings BUSINESS CARD signed by him! printed with the picture of Tenzing on the summit of Everest. signed by Tenzing and Ed Hillary and dated 15/4/82? Tenzing Trekking & Mountaineering (P) Ltd. size 3.5 x 2 ins.

The First Ascent of Mount Everest 29th May 1953

Rare and fine Mount Everest mountaineering books for sale and collectable memorabilia signed by Hillary and Tenzing - the first men to climb to the summit of Mount Everest, the highest mountain in the world. 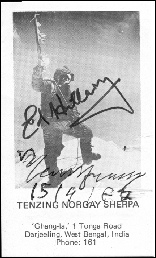 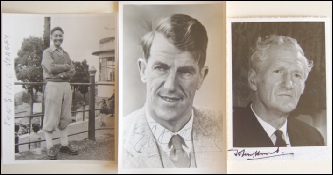 Had it not been for Dan Bryant and his ‘delicious brand of humour’, then Shipton may not have answered that ‘any two’ may join his 1951 Mount Everest Reconnaissance, in reply to a request from the New Zealand Alpine Club. The First Ascent of Everest might not have been achieved by Hillary and Tenzing in 1953. And had it not been for George Lowe it is true to say that Ed Hillary would not have been invited to join the N.Z. Garhwal Himalaya Expedition in the first place. More prominent New Zealand mountaineers had been invited, joined and dropped out. George Lowe didn’t know Hillary well but suggested that he would make a suitable replace

ment. First ascents in New Zealand from 1947 had mostly been achieved by a handful of men, George Lowe, Geoff Milne, Earle Riddiford, Norman Hardie, Bill Beaven, Jim McFarlane et al. Hillary had for the most part been climbing with professional guide Harry Ayres and it was at the Hermitage that he had met aspiring guide George Lowe. They had forged a strong friendship as mutual trust and respect grew whilst climbing together on Elie de Beaumont. Ed returned the favour and spoke favourably to Shipton about his climbing partner George who now got his Everest chance when invited by Shipton to join the Cho Oyu Expedition 1952.

All the time George Lowe was getting along well despite his left arm which had been broken when he was nine. It was never set properly and it’s muscles wasted over time, but George overcame this very successfully, becoming a superb ice climber. His solo adventure on the Lhotse Face of Everest in 1953 is legendary, even though he thought that he had let John Hunt down. It is difficult to cut ice steps at altitude especially when hampered by an arm that was ‘set’ at an angle of 90 degrees and could only flex 15 or so in either way from that. This injury may have been hidden from Shipton, certainly John Hunt was not aware of it. Both Hillary and Lowe escaped a medical examination undertaken by the other team members in London. Hillary had poor hearing, his ears having been blasted in a terrible explosion on his home made boat in the Pacific before he had taken up mountaineering.

Should Hillary and Lowe been examined at the London medical which other team members undertook, these injuries without much doubt, would have prevented them both from being involved in the Everest party and the mountain may well not have been climbed?

All the pieces on this page are for sale (if not already sold) Please email astill.tony@gmail for prices 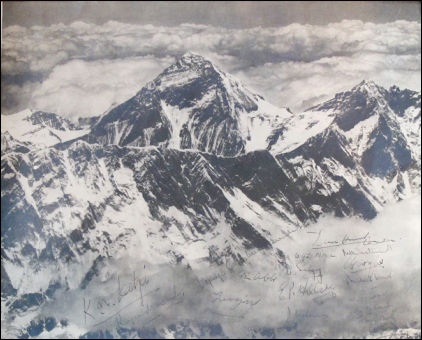